Shadows and Lights for Stravinsky's "The Rite of Spring" 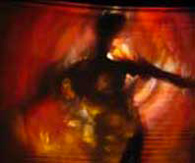 Controluce key research is the relationship between music and shadows, under this aspect Stravinsky's score represents a point of arrival and a renewal in Controluce's career. The themes of cyclical nature of life, seguence of life and death; "sacrifice", understood in a secular way as a condition for growth and overcoming divisions, find in this work a theater solution which at the same time is a set of Stravinsky's music, nearly a visual score, and a test of new spatial perspective and interaction between shadow, light, silhouettes, bodies of dancers and shadow-makers ("ombristi") themselves on the stage.
In an abstract and mythical space, dominated by a kind of atavistic altar, the way the shadows is built: from primordial chaos and irrational to the appearance of man, almost a prisoner of his own shadow in its duality and laceration. He finds, overcoming immobility and stasis, in the unique gesture of "sacrifice", the painful way for getting free and starting a new world, which is different but also mirror reflection of the past one, where the color of sacrifice appears as a sign of possibility and future.