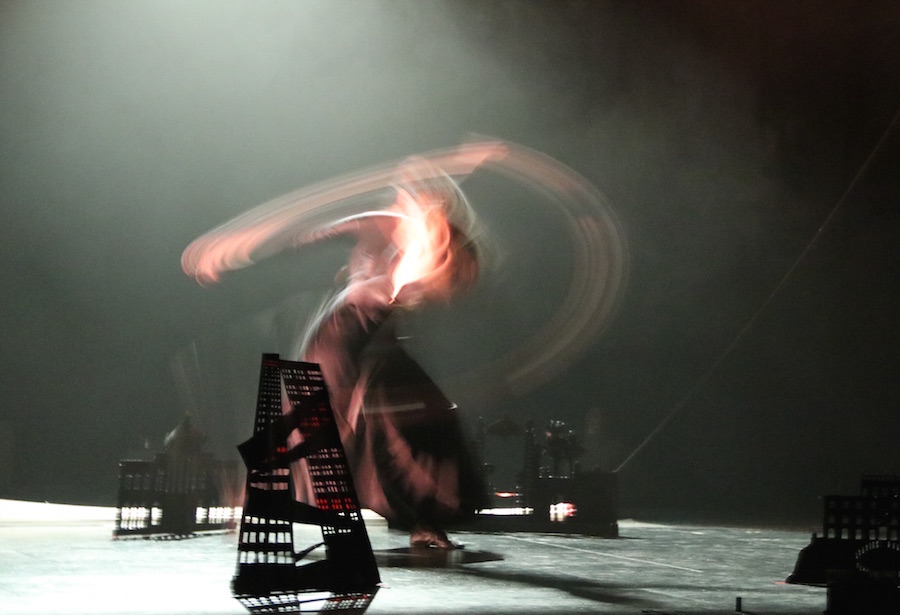 About songs: The music of this show spans 7 centuries, four languages ​​and very distant genres. Ages are contaminated by the use of instruments such as the electric guitar for a piece of the Renaissance. In Darkness, by John Dowland (1563-1626), it represents melancholy as an architecture, a closed room, without light, of black and wet marble. Cosa sono le nuvole is a song by Domenico Modugno (interpreter of the world famous Volare). The text is by Pasolini, who has inserted fragments of Shakespeare's Otello. It is at the same time Italian pop of the 60s, and a refined, strange piece. Villes is a theatrical piece by Benjamin Britten (1913-1976) originally written for tenor and string orchestra. The text, visionary, psychedelic, is taken from The Illuminations of Rimbaud. Es fuegt sich is an autobiographical song by Oswald von Wolkenstein (1376-1445). Born in Tyrol, he leaves at age 10 as the squire of a knight errant. From then on he traveled throughout the known world of his time, also as a merchant and ambassador, from Lithuania to Portugal and Arabia ... In the two couplets chosen here, he enumerates the languages ​​he spoke, the countries crossed , the instruments he learnt to play, the drops of blood left on the road...
The instrumental pieces are by Steve Reich, Paganini, Diego Ortiz. The arrangements are by Antonio Albanese.

Invisible Cities in Shadows Theater
In 1972 The Invisible cities of Italo Calvino appears. Calvino imagines a conversation between Marco Polo and Kublai Khan, the Tartar emperor. The emperor is feeling melancholy, he sees the day of his death approaching and thinks that his empire will vanish sooner or later. But he thinks he can guess in Marco Polo's stories something that could escape the bite of time. The traveler then describes impossible cities, unreal: cities made of desires, nostalgia, ghosts, fears, signs, words ...
It is an enigmatic journey, a dark and luminous meditation on what we are, amid wonder and dismay.
The theater of shadows is a strange discipline, dark and luminous too. In it, to show you must hide. It allows you to show the cities, preserving their invisibility. The emperor is not on stage. He is perhaps in the audience. He is you.